A majority Sydney Coastal Councils have voted to remove shark nets from their local government areas in favour of alternatives. While this doesn’t mean the nets are gone yet, they could be soon. Here’s why that will be better for public safety.

Shark nets only provide a false sense of security. Sharks can swim over and under them. Most sharks found in the nets were caught on the way out from the beach and 34 shark bites have taken place on netted beaches (1); in New South Wales. Whereas the available alternatives of drones and SMART drumlines are much more effective at reducing the risk of shark bite.

Drone surveillance is the most advanced shark detection system we’ve ever had. Drones can be flown up and down the beach providing surf lifesavers an eye in the sky with nearly complete coverage of the survey area. If a potentially dangerous animal is spotted, alarms are sounded and the water quickly cleared. Drones can also address the much greater risk at the beach of drowning by identifying swimmers in distress and can even be fitted to drop personal floatation devices. For these reasons, drones are quickly becoming standard components in the beach safety toolkit.

*The graphics below come directly from the NSW Department of Primary Industries’ (DPI) SharkSmart website www.sharksmart.nsw.gov.au. 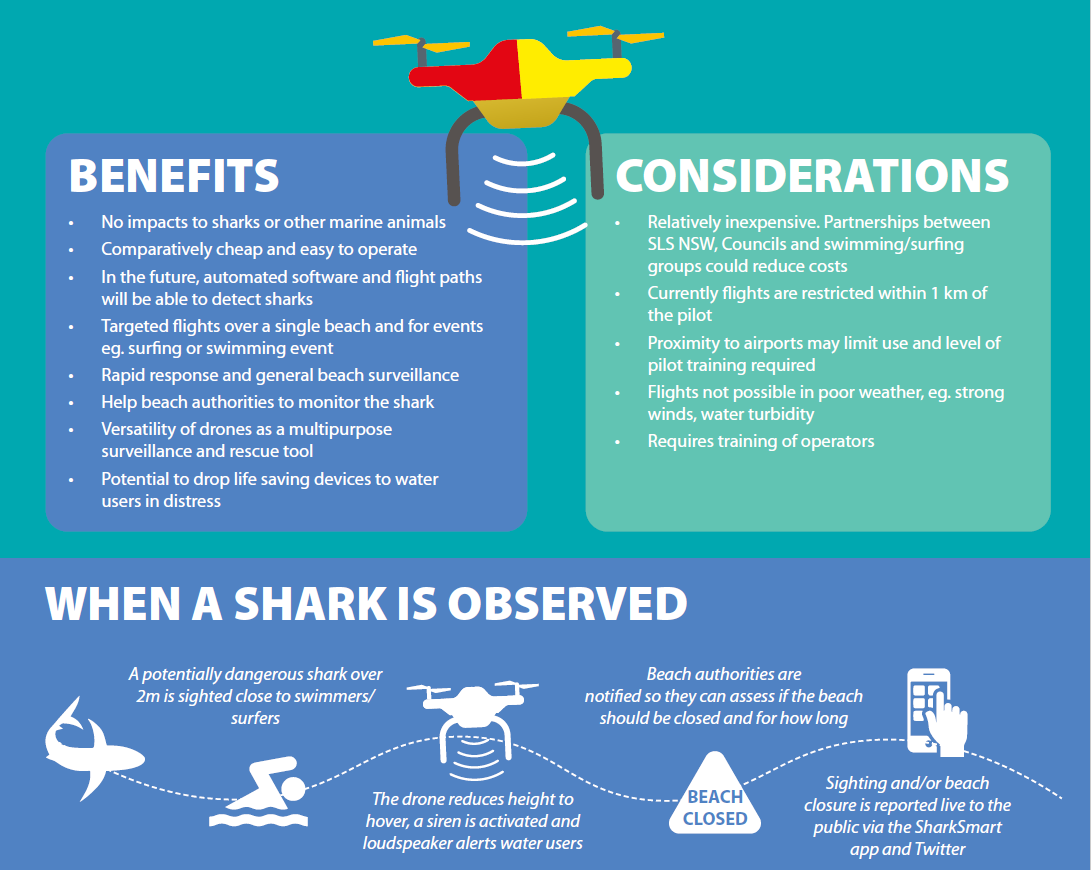 SMART drumlines (standing for Shark Management Alert in Real Time – SDLs) are effective non-lethal capture and relocation systems. Though concerns remain over the welfare of animals caught on SDLs, they are much better at targeting sharks than nets, and they are designed to relocate sharks offshore rather than kill them. During government trials across five years on NSW beaches, SDLs caught far fewer non-target wildlife (217) than nets (2,228) over the same time period, and far more target sharks (499 vs 171). Most impressively, SDLs killed less than 1% of animals caught, whereas nets killed 55%. 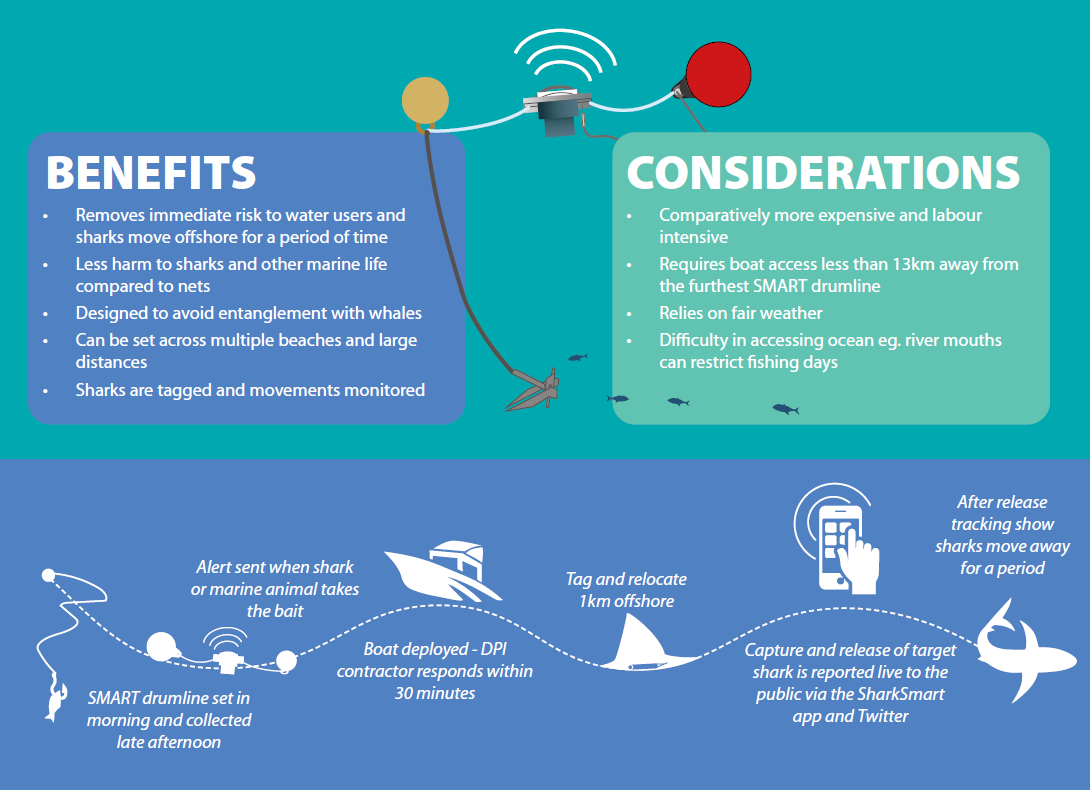 More cutting edge technologies to reduce the risk of shark bite are being developed every day.  Personal shark deterrents emit an electrical field, reliably reducing interactions.  The Shark Safe Barrier is a South African design using a physical barrier in the form of anchored, floating PVC pipe, mimicking kelp, and a magnetic field emanating from the pipes creating a wildlife safe barrier that large sharks will not cross.

Shark nets are nothing more than a false sense of security that kills wildlife. 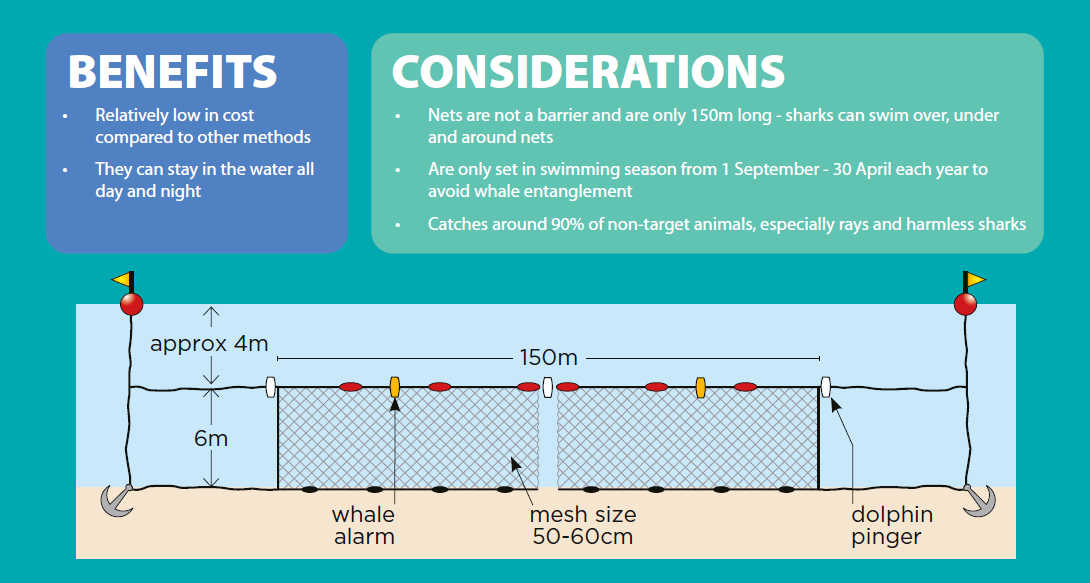 DPI’s own social surveys repeatedly confirm that shark nets are the least preferred of their options for managing the risk of shark bite. Our own public surveys say the same. On the Northern Beaches, 60% of residents called for the removal of the nets, 72% wanted nets replaced with SMART drumlines, and 80 called for more drone surveillance. Coastal communities, and now the councils, have spoken.

New, technology-driven methods are much more effective at reducing the risk of shark without the terrible cost to wildlife. Make no mistake – getting rid of the shark nets in favour of new non-lethal technologies are better for marine wildlife, the ocean, and public safety.

When is it in the public interest to destroy the environment that sustains us? British horrified to see mutilated lambs and battery hens as UK-Australia trade deal is negotiated

Going camping this summer or chasing the snow?

Are you looking to update your outdoor weather wardrobe? Wool is a popular fibre used in adventure clothing, but it has animal welfare issues to watch out for and on this topic, we’ve got you covered.   Mulesing is one of the most painful mutilations inflicted on Australian livestock, a...

Food was on the table at COP27, but there is still much more work to be done

As the UN climate convention ends, Humane Society International is encouraged by recognition of food system’s contribution to the climate crisisHumane Society International is encouraged by the long overdue recognition among climate talk negotiators that food systems not only contribute to the ever-worsening climate crisis but can also serve as...